TOO MANY HIGHLIGHTS TO MENTION... A MASSIVE THANK YOU TO EVERYONE THAT JOINED US.

We’re excited to announce this years line up for the Castell Gardens, hosted by No.6 favourites The Social and powered by Sound System – the acclaimed speaker stack system created by British audio brand Bowers & Wilkins. This year, the Castell Gardens will be a perfect combination of DJ, talks and spoken word featuring an exclusive 5 hour set from Pulp frontman Jarvis Cocker and friends, Goldie’ Drum & Bass set, Mary Anne Hobbs, Benji B, The Kevin Rowland DJ Show, Steve Davis and Kavus Torabi, David Holmes DJ set and many more.

Be seeing you in the gardens… 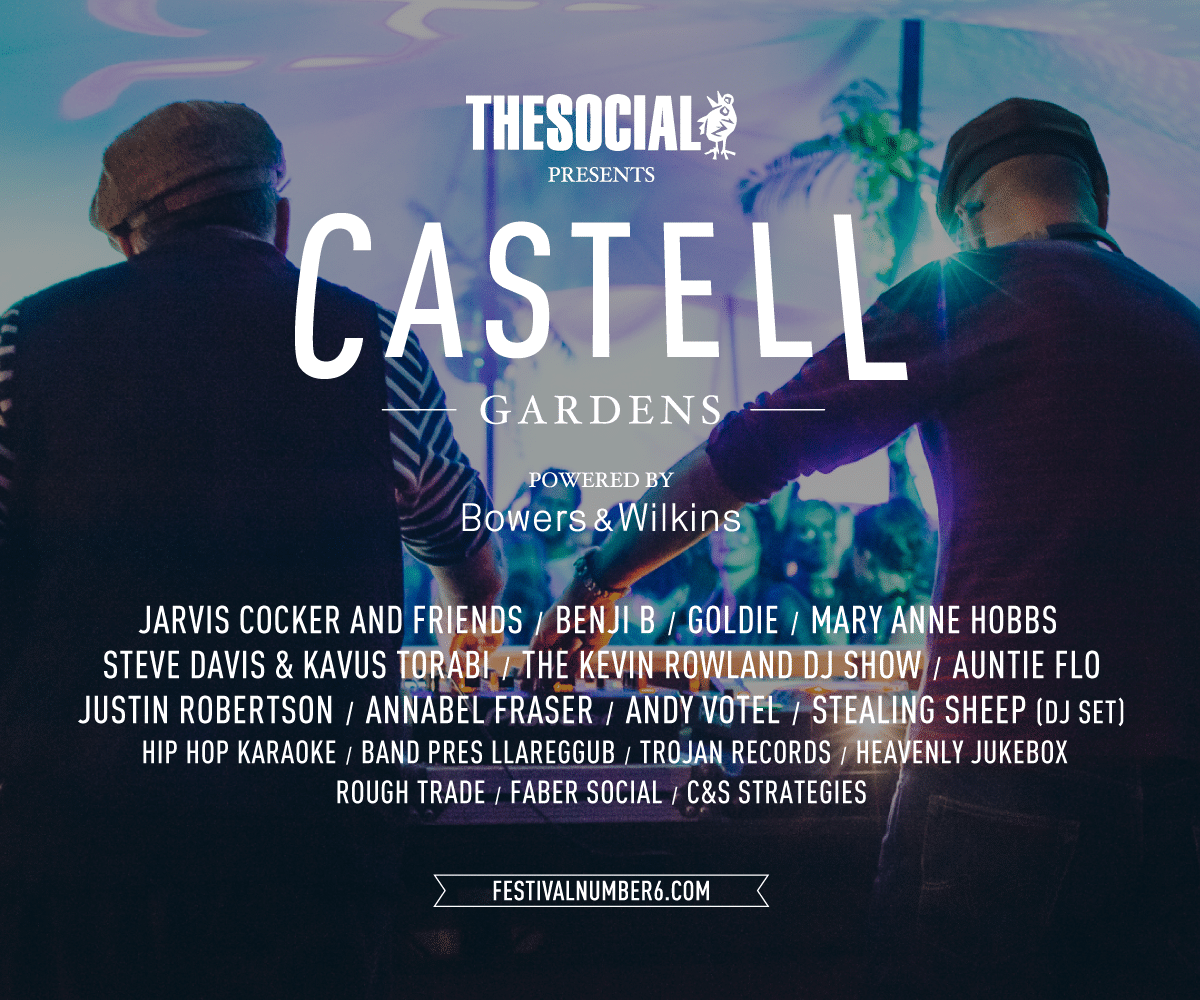 Bowers & Wilkins is a global leader for premium loudspeaker products and purveyors of “true sound” with over 50 years of audio heritage. It’s innovative, award-winning audio products are an essential element to audio entertainment whether at home or on the move. Bowers & Wilkins loudspeakers are highly regarded as the definitive “audio reference,” as demonstrated by their use in leading recording studios throughout the world including Skywalker Sound in California. The notion that remarkable sound must be experienced to be fully appreciated is reinforced by the company’s motto – ‘Listen and you’ll see.’ 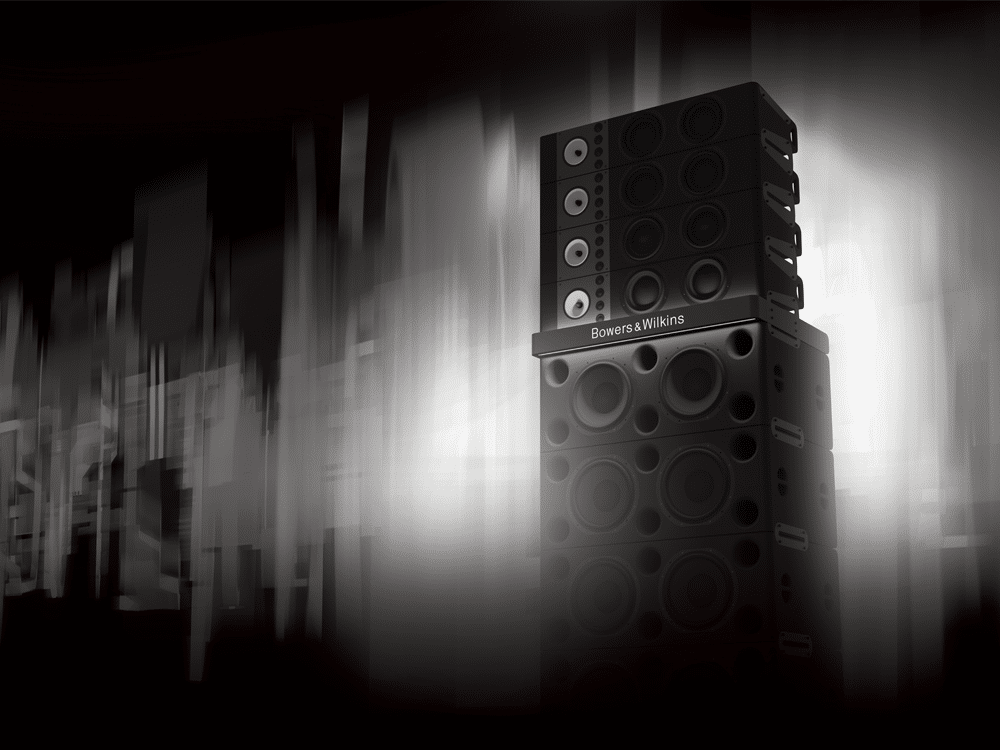 In 1999 The Social opened in Little Portland Street. The brainchild of a record company whose offshoots included a hugely successful underground club night, The Social was set up with a simple manifesto – to provide great music and better booze to anyone who fancied tripping through the doors. Nearly 20 years later and still run by the original team who created it – Heavenly Recordings & The Breakfast Group – the bar is an award winning London landmark. Designed by a partnership of David Adjaye and Will Russell with a brief of withstanding nuclear attack or – at the very least – the worst that people could chuck at it. The Social has launched well over a million hugely successful hangovers. 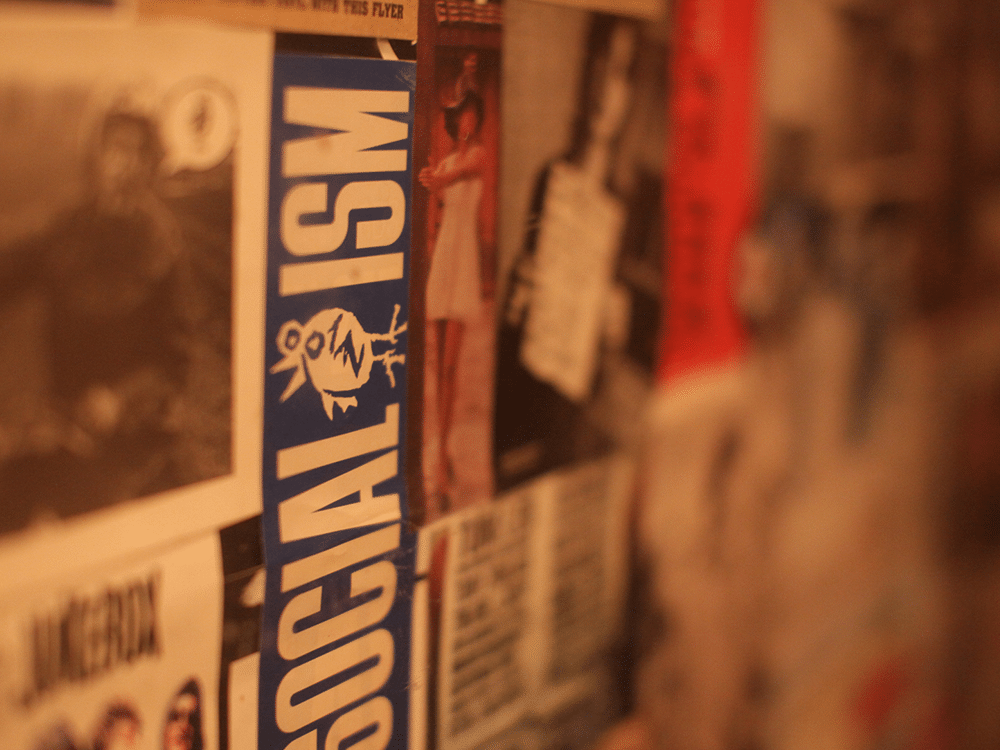 — PRESS —
“Festival No.6 imbues the village with Clough’s spirit and brings the
place to life in a way no other event could ever achieve. Clough would
give you five stars, and so do we.”

— Portmeirion —
"A festival that’s as unique as it bills itself, a beautifully put-together event in a setting to match."

— PRESS —
"This is the coolest, most surrealist, funkiest, freakiest, best festival in the world... Can we just come back every year?"

— MUSICIAN —
"That was undoubtedly a career highlight."

— MUSICIAN —
"The most bijou location of any music event I've ever attended."

— PRESS —
"Festival No.6 could rival Montreux as the most sophisticated in Europe."

— PRESS —
"For six years Festival No 6 has had bills as bizarre and inventive as its location, Portmeirion, best known as the set for 1960s TV series The Prisoner."

— PRESS —
"Festival No.6 is still the oddest and most magical of the lot."

— PRESS —
"The most Instagrammable festival in the UK"

— PRESS —
"We feel like we're in the exact place we should be". Wayne, The Flaming Lips

— MUSICIAN —
"Small festivals always claim to offer something a bit different, but set in what can only be described as the magical fantasy land of Portmeirion, Festival No. 6 really does."

— PRESS —
"Since its inception in 2012, Festival No. 6 has solidified its place as the left-of-centre, late-summer bash for grown ups looking to behave (kinda) badly."

— PRESS —
"These days, with every summer Saturday filled to the brim with entertainment options jostling for attention, festivals need a USP to really stand out. And boy, does Festival No.6 deliver on that front."

— PRESS —
"Festival No6's programme is nothing if not eclectic, encompassing culture, comedy and music"

— PRESS —
"Almost every festival claims to be 'unique', but in the case of this North Wales' curiosity it's a fairly solid claim."

For those wishing to arrive on Friday, please note that programming starts from midday. *All prices exclude a per ticket booking fee (BF) and a per transaction delivery fee (which will based upon your billing address).

Thursday arrival is ideal for those who would like to extend their getaway and avoid the rush on Friday. Please note there is no entertainment programmed on Thursday, however, Portmeiron Village will be open for exploring as well as bars and food concessions. *All prices exclude a per ticket booking fee (BF) and a per transaction delivery fee (which will based upon your billing address)

For those of you who are unable to join us for the whole weekend, we’ve just announced our daily line-ups so you can choose your favourite day (or days).

Your table awaits… Our amazing No.6 bespoke dining experience hosts an incredible line-up of Michelin-starred and innovative chefs. Dinner at Clough’s is situated in the auspicious main dining room of Hotel Portmeirion, the most spectacular dining location on site, with stunning views across the estuary of the River Dwyryd. Please continue through to the Extras page if you have already purchased a ticket.

The Boutique Village is now sold out.

Pitch Village is now sold out.

Arriving by train is one of the smoothest ways to travel to Festival No.6. Trains arrive into Bangor from over 30 locations around the UK and we have shuttles waiting for you to take you to our stunning coastal home, Portmeirion. You can book Bangor shuttles when you arrive to the train station.

If you live locally to Portmeirion, you can now buy a Local Shuttle pass at just £5 for unlimited use over the whole weekend.

Located on the beautiful White Horses Promenade, the Estuary Spa is the perfect setting to sit back, relax and unwind whilst taking in the views of the beautiful River Dwyryd... Brought to you by Bathing Under the Sky.

In its new home, the Gwyllt Woods, the Wellbeing Hub hosts a variety of relaxing and energising yoga sessions from Nine Lives Yoga, FRAME fitness classes and Yoga Brunch Club.

Begin your mornings at No.6 with a Paddle Boarding Session on the River Dwyryd Estuary. It’s the perfect excuse to escape for an hour and experience one of Portmeirion’s most stunning spots and meet friends new and old…

The House of Peroni Masterclasses

Log into your dashboard to view your booking or manage your payments. If you wish to upgrade from General Admission to VIP, or from No Camping to Camping, please call Customer Service on 0844 967 0002.

We're excited to announce that this years official festival programme is in partnership with Wallpaper*, the leading global magazine for design, architecture, travel, art and lifestyle. Featuring over 250 artists across 25 unique venues, exclusive features from Wallpaper*, the festival map and set times, this is the first ever Wallpaper* Festival Guide to be produced. Pre-order your limited edition copy today, and collect when you arrive at No.6.